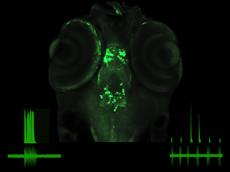 Transgenic zebrafish; with labeling in the dopamine neurons.
Normal motor development requires input from these neurons.

Development of connectivity, axons and synapses. Role and effects of hypoxia on CNS development. Leukodystrophies.

1. Developmental functions of human disease genes.
We are studying the role of several human disease genes on CNS development. For example, the gene FOXP2 controls the development of language in humans, and we are studying its role in regulation of axon fasciculation and axon pathfinding. We are also studying genes involved in human leukodystrophies, and developing a zebrafish model for developing novel therapies.

2. Development of the basal ganglia.
The basal ganglia play a critical role in the CNS, and dysfunction underlie many common neurological disorders (cerebral palsy, Parkinson's, and Huntington's, for example). We have developed unique transgenic lines which specifically label subsets of basal ganglia neurons, allowing us to perform live visualization of their development. These transgenic lines are allowing us to analyze which genes are necessary for the development of basal ganglia connectivity, and the role of genes such as GBA in the development of Parkinson's disease. Finally, we are determining what genes control reorganization of neural circuits following CNS injury.

3. Novel techniques for analysis of CNS connectivity.
Understanding how the CNS is wired is extremely complex. We are developing novel technologies to analyze how genetically distinct neurons recognize and target specific connections, and what the functional relevance of these connections are. The first technique, the use of Gal80 in vertebrates, is in press (Fujimoto et al., 2011). The second technique uses an innovative method to permit trans-synaptic labeling in live animals.