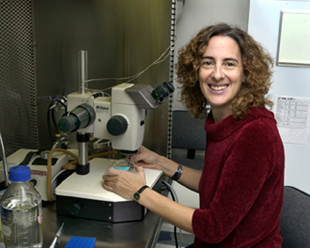 Dr. Condic is interested in the control of cell specification and neurite outgrowth during development. We are investigating the cell-signaling molecules that control the formation of different sub-classes of sensory neurons, and working to identify genes that contribute to the unique pathfinding behavior of these cells as they navigate to their targets. Embryonic sensory neurons are unusual in their ability to compensate for inhibitory or weakly growth-promoting substrata by adjusting their expression of receptors for growth-promoting matrix molecules (receptors of the integrin class). Recent work from our laboratory has demonstrated that integrins interact with other growth cone guidance molecules, such as netrins and semaphorins, to regulate growth cone behavior. We have also shown that the regeneration of adult neurons in the presence of inhibitory molecules can be greatly improved by transgenic integrin expression. Regulated integrin expression also contributes to the migration of neural crest, the immediate embryonic precursors to sensory neurons. We are currently investigating whether differences in integrin-based cell motility play a role in the specification and differentiation of neural crest cells.

Condic, M. L., and Lemons, M. L. (2002) Extracellular matrix in spinal cord regeneration: getting beyond attraction and inhibition. NeuroReport 13(3):A37-48.