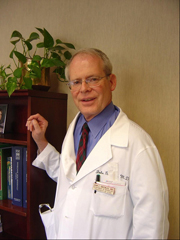 Dr. Greenlee's laboratory investigates the role of the immune system in paraneoplastic cerebellar degeneration, a nonmetastatic complication of systemic cancer, characterized by destruction of cerebellar Purkinje cells and at times other neurons. The condition occurs most often in the setting of cancer of the lung, cancer of the female reproductive tract, or cancer of the breast. The onset of symptoms may be as long as two years before detection of the associated neoplasm. Dr. Greenlee's laboratory has shown that sera and cerebrospinal fluid from patients with this disorder contain high titers of antibodies to Purkinje cells and other target populations of neurons. Work over the past several years has demonstrated that this antibody response is elicited by tumor proteins similar to antigens within Purkinje cells or other neurons. Our recent investigations, employing organotypic cultures of rat cerebellum, demonstrate that these antibodies can be taken up by neurons and produce neuronal death. We are currently studying mechanisms of antibody uptake by neurons and mechanisms involved in antibody-mediated cell death.