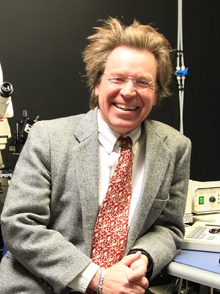 What is the molecular nature of memory? Memory is encoded by changes in the strength of synapses. It is our goal to identify the molecules that function at the synapse and to understand how the activities of these molecules are changed to strengthen or weaken a synapse. To identify such molecules we perform genetic screens for defects in neurotransmission in the nematode Caenorhabditis elegans (Fig. 1) and then validate our conclusions in the mouse.

Fig. 1, The nematode C. elegans expressing GFP in a subset of neurons.

C. elegans is particularly advantageous for genetic studies of the nervous system for four reasons: First, mutants with defective synapses are viable and can be studied as adults. Second, we can select for mutants with defective neurotransmission using drug resistance screens. Third, manipulation of the genome using Mos transposons and CRISPR is particularly easy and the generation time is only three days. Fourth, we can characterize mutant synapses at the ultrastructural and electrophysiological level.

To validate our findings we characterize mutants in dissociated hippocampal cultures from the mouse. The mouse is particularly advantageous because first, mutants in synaptic proteins are readily available and second, the genome can be altered in cultured neurons using lentivirus infection. To analyze synapses we have developed new methods in electrophysiology, new instrumentation for electron microscopy ('flash-and-freeze), instrumentation for super-resolution fluorescence microscopy and correlative super-resolution electron microscopy.

What are the molecular mechanisms of vesicle fusion? In our screens we have identified UNC-13, UNC-18 and the SNARE proteins. We are characterizing the molecular interactions that drive fusion. Using electrophysiological recordings and analysis of vesicles by electron microscopy we have determined that these proteins are required for docking and priming vesicles for release at the cell membrane. 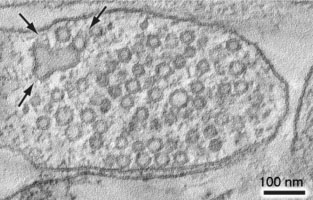 Fig. 2, An electron tomogram of a mouse hippocampal synapse regenerating vesicles (arrows) from a synaptic endosome 3 seconds after stimulation.