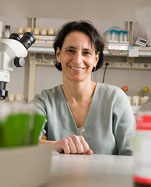 We use embryonic dorsal closure in the fruit fly, Drosophila melanogaster, as a model system to study regulated changes in cell shape and motility. During dorsal closure, epidermal cells elongate and lose their continuity with the extraembryonic membrane, the amnioserosa. Epidermis and amnioserosa overlap transiently. The latter is incorporated into the embryo, and the dorsal epidermis achieves closure when the lateral epidermal sheets meet and fuse at the dorsal midline. Clearly, physical changes in cell shape and motility play important roles in this morphogenetic process.

Several of the genes that are required for dorsal closure have recently been cloned and characterized. Molecular studies revealed that although these gene products all function in the dorsal epithelium, they can be separated into at least three groups: I) molecules with structural roles in the maintenance of the integrity of the epithelial sheet; II) molecules that function in Transforming Growth Factor-β (TGF-β) -mediated signal transduction, and III) molecules that function in the Jun-N Terminal Kinase (DJNK) signaling pathway.

Our recent progress in identifying Class II gene products and characterizing their roles in TGF-β-mediated signal transduction provided the first evidence for dual ligand specific TGF-β receptors. In addition, our research provided the first identification of a transcriptional effector of a TGF-β signaling pathway. Taken together these data, as well as data from several other laboratories, have led to a sequential signaling model for dorsal closure. After activation by an unknown factor, DJNK. DJNK signaling in leading edge cells induces: 1) elongation of leading edge cells, and 2) secretion of Dpp (Decapentaplegic, a cytokine of the TGF-β superfamily) from leading edge cells. The Dpp cytokine is postulated to consequently activate Dpp-mediated signaling in adjacent epidermal cells and to induce their elongation.

The primary goals of our research are to build upon our initial observations and extend our knowledge of the molecular mechanisms of dorsal closure. Although many of the components controlling dorsal closure have been identified, several important questions remain unanswered. For example: 1) What signal triggers DJNK signaling? 2) Where is the source of this signal? and even more fundamentally, 3) How are the DJNK and Dpp signals translated into cell shape changes? The objectives of our ongoing research are to answer these three questions.