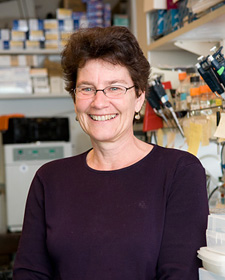 The inner ear, which mediates the sensations of hearing and balance, is derived almost entirely from a small patch of ectodermal cells that are specified for an otic fate early in fetal development. Through a series of tissue interactions that are mediated by secreted signaling molecules, otic cells undertake complex processes of morphogenesis and differentiation to achieve their final functional form. Abnormalities of these processes lead to congenital deafness, which is the most common human sensory disorder. To better understand these disorders, my laboratory employs genetic and molecular approaches to identify and characterize genes that are important for the development and/or function of the mouse inner ear.

Fibroblast growth factor (FGF) signaling plays critical roles in the early development of the ear. Disruption of either Fgf3 or Fgf10 leads to variable defects of mouse inner ear morphogenesis and our studies show that Fgf3 plays a critical role in sustaining dorsal otic gene expression required for vestibular (balance) functiion. In addition, we found that Fgf3/Fgf10 double mutants have no ear development at all, showing that these genes are required redundantly for the initial induction of the otic placode, as well as individually in subsequent morphogenetic steps. Fgf3/Fgf8 double mutants have a similar phenotype because Fgf8 is upstream of Fgf10. We are using conditional mutants to dissect the tissue origins of these inductive FGF signals and find evidence for essential roles for FGF signaling in ectodermal, mesodermal and neural tissue. In addition, microarray comparisons of control and FGF-deficient otic placodes and RNA-seq studies of otic tissue in which FGFR2b signaling is inhibited revealed transcriptional targets of FGF signaling (Urness et al., 2010; Urness et al. 2015 in prep). Several interesting candidates for roles in otic induction and subsequent inner ear morphogenesis are under further investigation.

Ablation of Fgf3 and Fgf10 alleles specifically within the otic epithelium has revealed dosage sensitive roles for these genes in directing both cochlear and vestibular morphogenesis. Our results show that Fgf3 and Fgf10 have unappreciated roles in cochlear development. Together with the Schoenwolf laboratory we are investigating how these FGF signals are coordinated with BMP and SHH signals to regulate the cell behaviors driving otic morphogenesis.

Many forms of sensorineural hearing loss, whether caused by genetic or environmental factors, are characterized by loss of cochlear sensory cells, which do not regenerate in mammals. In contrast, birds and fish regenerate lost sensory cells from residual cochlear supporting cells. Strategies for hearing restoration in mammals are focused on manipulating developmental signals to change cochlear supporting cell identity. We showed that mice with an activating mutation in FGFR3 that models Muenke syndrome have hearing loss associated with an identity switch between two distinct types of supporting cells. We found that supporting cell identity and hearing are restored in these FGFR3 mutants by genetically reducing the level of FGF10, a ligand does not normally activate FGFR3. Accordingly, we found that the mutation changes FGFR3 specificity so that it becomes responsive to FGF10. Most remarkably, we found that the supporting cell fate switch is actually completed the "rescued" animals, but is then gradually reversed. This shows that seemingly fully differentiated cochlear supporting cells can reversibly switch fates in an FGF-dependent manner. Since some immature supporting cells can be induced under certain circumstances to convert to sensory cells, this FGF-dependent plasticity is being investigated so that it be exploited as a component of strategies designed to promote mammalian sensory cell regeneration from supporting cells.