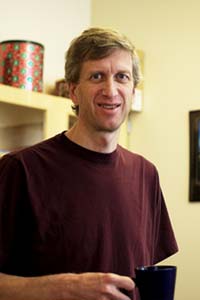 False-color confocal image of C. elegans body wall muscle. Muscle arms emerge from the cell body and extend downwards, making contact with nerves at the tips of the arms.

The workings of synapses; molecular mechanisms regulating plasticity and behavior

A challenge for neuroscience is to bridge the gaps between genes, proteins, neurons, neural circuits, and behavior in a single animal model. The nematode Caenorhabditis elegans has unique features that facilitate this synthesis. Its nervous system includes exactly 302 neurons, and their pattern of synaptic connectivity is known. The neurons are organized in neural circuits that process information and control behavior. How are these circuits constructed? What molecules are required for circuit function? How do circuits control behavior and how do behaviors modify circuits? In the past several years, we have made major advances in understanding how specific signaling molecules contribute to synaptic function and behavior.

I. Analysis of Glutamate Receptor Function

Dysfunction of glutamate-receptor-mediated signaling is implicated in various mental health and neurological disorders, thus there is intense interest in gaining a mechanistic understanding of the assembly, localization and function of ionotropic glutamate receptors (iGluRs). We have identified three new auxiliary proteins, SOL-1, STG-1 and STG-2 that co-localize with the GLR 1 AMPA receptor and are required for AMPA iGluR function. We have now identified a fourth auxiliary protein that is similar to SOL-1. We are currently studying how this signaling complex contributes to synaptic plasticity.

II. Contribution of iGluRs to learning and memory

Learning and memory are essential processes that help animals survive and reproduce. We have discovered two genes, nmr-1 and nmr-2, that encode subunits of an NMDA-type (NMDAR) iGluR. Deletion of these genes disrupts memory retention in C. elegans. How this receptor contributes to circuit function and memory is an ongoing area of inquiry.

III. Analysis of neuromuscular development and function in C. elegans

Nicotinic (cholinergic) neurotransmission has critical roles in the nervous system and underlies nicotine addiction. We have identified two new genes required for the nicotine-gated current found at a subset of C. elegans synapses. Our current research is aimed at gaining a mechanistic understanding of how WNT-mediated signaling regulates the development and function of cholinergic synapses.

Our genetic studies in C. elegans revealed that receptor desensitization is evolutionarily conserved and of critical importance for the control of behavior. To test this idea using a completely different approach, we identified a novel toxin from a fish-hunting snail that fully blocked AMPAR desensitization; a nice example of nature exploiting an unrecognized Achilles heel – receptor desensitization. We are continuing our studies of these and other toxins.