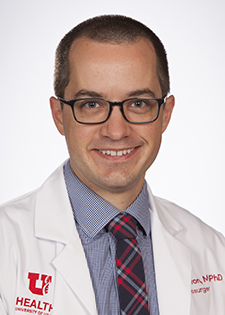 Dr. John Rolston is a neurosurgeon and neuroscientist at the University of Utah, where he is the Director of Epilepsy Surgery and Director of Stereotactic and Functional Neurosurgery. Clinically, he specializes in epilepsy surgery, deep brain stimulation (DBS) for movement disorders (Parkinson’s, dystonia, tremor), trigeminal neuralgia, and neuromodulation for psychiatric disorders (such as depression, obsessive-compulsive disorder, and Tourette’s syndrome).

Dr. Rolston’s lab investigates how electrical stimulation can be used to map and ultimately rewire the diseased brain. These neural engineering tools are used to better understand neural information processing and how it is disordered in illnesses like epilepsy, Parkinson’s, and psychiatric disease.