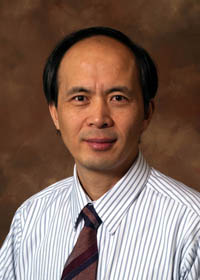 To determine how RGC synaptic connectivity are regulated during normal development, we have examined the dendritic and axonal structure of RGCs using in vivo and in vitro confocal imaging and transgenic mouse models, in which green or yellow fluorescent proteins (GFP or YFP) are constitutively expressed in RGCs. We found that both RGC dendritic ramification in retina and axonal projection in the higher centers of the visual system, such as dLGN, undergo active refinement after birth in mice. This developmental refinement is regulated by retinal synaptic activity. Blockade of either spontaneous or light evoked retinal synaptic activity impaired the normal development of RGC synaptic connectivity in both retina and dLGN. Using laser confocal time-lapse imaging, we can visualize mouse RGC dendritic remodeling and quantify the kinetics of the morphological refinement. Using electrophysiological recordings, such as patch-clamp recording of synaptic activity of individual retinal neurons or multiple electrode array recording of concurrent spike activity from multiple RGCs, we detected significant maturational changes of RGC spontaneous synaptic activity and light responsiveness during postnatal development. These age-dependent changes of retinal synaptic activity play an important role in the maturation of synaptic circuitry of visual system. More recently, we are investigating the molecular mechanism which links the developmental changes of synaptic activity to the changes of synaptic structure. Surprisingly, we found that an immune molecule (CD3ζ, which is a key element of T-cell receptor), is expressed by retinal neurons and involves in the activity-dependent developmental regulation of RGC dendritic maturation in the retina and axonal projection in the dLGN.

Movie 2.
Time-lapse image of a segment of RGC dendrites shows the dynamic changes of the dendritic protrusions of RGC in developing retina.

The results of these studies provide insights to how retinal synaptic circuitry could be changed during activity-dependent synaptic plasticity. They also have important implications in how we view pathologies that affect vision during infancy and childhood. 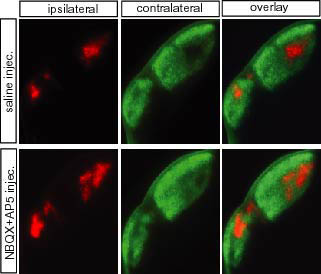