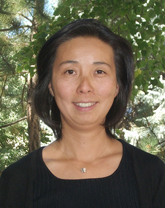 Associate Professor of School of Biological Sciences
The Yamaguchi Lab

Most animals can be divided into two groups, males and females. Although most behavioral patterns including locomotion, feeding, and grooming are similar in males and females within a species, behavior involved in reproduction are drastically distinct between the sexes. For example, a male songbird engages in singing behavior while a female engages in nest building behavior at the beginning of the breeding season in the temperate zone. What are the neural mechanisms that dictate males and females to behave in such distinct manners? In Yamaguchi lab, we address the question from neurophysiological standpoint using vocal behavior of African clawed frog (Xenopus laevis) as a model.

The ultimate goal of our research is to understand how neuronal circuits generate male- and female-specific behavior. To this end, we are conducting neurophysiological experiments to understand the function of neural pathways that regulate vocal production in African clawed frogs, Xenopus laevis. Male and female Xenopus generate sexually distinct vocalizations underwater. The sound is generated by a single pair of laryngeal muscles dedicated for vocalizations. The sex differences in the vocalizations can be reduced to differences in muscle contraction rates, and, in turn, differences in the firing rates of laryngeal motoneurons (male motoneurons fire at faster rates than female motoneurons). The simplicity of this behavior and its effector pathway make the Xenopus vocal system an ideal model for understanding the neural basis of behavior. In addition to the simplicity of the neural pathways, there are two distinct features that make Xenopus vocal system as an attractive model. First, we have recently developed an in vitro brain preparation from which fictive vocalizations (neuronal activity that generates vocalizations in vivo) can be repeatedly evoked (listen to an isolated brain sing in a dish). Using this powerful "singing brain in a dish" preparation, we can now analyze the function of neurons during vocal production in vitro. Second, we discovered that sexual differentiation remains plastic well into adulthood in Xenopus; androgen treatment masculinizes vocalizations of adult females within 1 to 3 months, and castration debilitate the function of the vocal pathways in males within a several months. Such plasticity in behavior provides us with an opportunity to study how the central vocal pathways are modified in response to androgen at cellular, synaptic, and circuit levels.